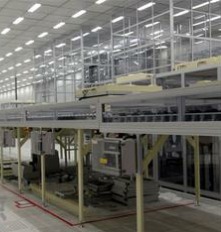 It is reported that the 8.5-generation line of BOE and Huaxing Optoelectronics will be fully produced, and the annual production capacity of the mainland panel will reach 44 million, which will easily surpass the Japanese system.

The China International Panel Display Cooperation and Innovation Development Conference was held in Beijing yesterday. Hao Yabin, vice president of the China Electronics Industry Association, disclosed that in the upstream of the industry chain, China has initially formed multiple 4.5th, 5th, 6th, and 8.5th generations. The construction of the line, with BOE and Huaxing Optoelectronics being fully productive on the 8.5th generation, is expected to reach 44 million pieces next year, accounting for 17.6% of the global market.

Xue Wenjin, vice president of the Nanjing Flat Panel Display Industry Association, told Nandu reporters that the Japanese panel industry is declining, the mainland panel industry will easily surpass the Japanese system, and the Korean and Taiwanese departments will become the three major forces of the panel industry, while the rise of the mainland panel will affect Taiwan. The panel poses a direct threat. It also stated that multiple 8.5-generation lines are under construction and the industry is picking up. Panel investment cannot be limited to the current downturn of the industry and should be based on long-term perspective.

At present, the domestic panel industry has formed industrial clusters such as the Bohai Rim, the Yangtze River Delta, and the Pearl River Delta, as well as various industrial parks such as the Chengdu-based development zone and Hefei. Each regional cluster has multiple panel lines and many Supporting companies, such as BOE in Beijing and Hefei, have their own brands. Huaxing Optoelectronics has rapidly emerged in Guangdong, and Samsung and LG Dâ€™s advanced generation lines are also advancing in Guangzhou and Jiangsu.

According to Li Yaqin, research director of Group Intelligence Consulting, in the current state of the major high-generation production lines are fully operational, it is estimated that the self-sufficiency ratio of domestic TV panels will remain at about 30.1% in 2013. In just a few years, the intensive launch of panel projects has changed the situation in which domestic panels are highly dependent on imported panels.

Until the third quarter of this year, in addition to Sharp, Panasonic, the performance of the panel giants began to turn positive.

According to the BOE Third Quarterly Report, the net profit attributable to shareholders of listed companies from July to September was 151 million yuan, which was compared with the loss of 927 million yuan in the same period of last year.

Xue Wenjin said that the industry has its periodicity, downturns, and peaks. Before the BOE investment, it suffered a few years of lows in the industry, but it has improved recently. Huaxing Optoelectronics is catching up with the 32-inch demand release, which will quickly improve earnings. It said that the current industry environment shows that the panel industry has recovered, the key is to pick up the time and extent.

In fact, for the investment in the domestic panel industry, the voice of â€œovercapacityâ€ is also heard. Xue Wenjin said that the investment in the panel industry needs long-term vision. â€œWhen the two 8.5th generation lines of BOE and Huaxing Optoelectronics were built, there was discussion about overcapacity in the industry. The fact is that when Huaxing Optoelectronics just started production, it was in short supply, and both companies were fully productive. In its view, foreign panel companies have not paid attention to 32-inch panels, and domestic policy stimulus factors have boosted domestic demand for corresponding products, and panel tariff increases have had a significant impact on low-margin companies. Domestic panel demand still exists. Huge space, "The two 8.5-generation lines are obviously not enough."

In addition to LCD panels, there are also many OLED projects around the country that have been launched or are in development. Apart from the three major clusters in the Yangtze River Delta, Bohai Rim, and the Pearl River Delta, the landing of more projects is also testing the overall development of the industry planning.

Zhang Yu predicted that â€œin the next year or two, there will be a large integration of domestic panel production lines, and the pattern of regional panel industry clusters will also change.â€ Xue Wenjin said that approval of the project does not mean immediate investment, including Nanjing. With regard to high-generation line projects, the development plan of the industry also needs constant observation and adjustment.

Next year, the number of flat-panel televisions will reach 45 million.

According to the latest data released by the Consumer Electronics Survey Office of the China Electronic Chamber of Commerce, overall sales of flat panel TVs in China will reach the expected 42 million units in 2012. Chinese brands such as TCL, Skyworth, Changhong, and Konka have grown rapidly, and their overall market share accounts for more than 70%. Among them, the growth rate of the tertiary market has clearly surpassed the primary and secondary markets, and it is expected that in 2013, the proportion of the tertiary and tertiary markets will reach 55%. With the overall sales volume of flat-panel TVs maintained at a low growth rate of 45 million units, competition in the third and fourth-tier markets will become more intense next year. According to the survey, consumer demand for large-size 46-inch and larger TVs is more than 56%, and large-size TVs will become mainstream in 2013.