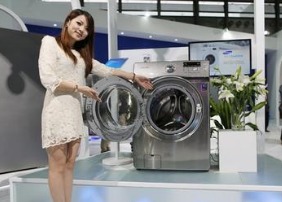 On August 27th, the Internet Consumer Research Center released the â€œReport on the Chinese Washing Machine Market in the First Half of 2013â€ â€‹â€‹(hereinafter referred to as the â€œReportâ€). At the same time, it announced the ten most popular washing machine models in the first half of the year, belonging to Haier, etc. Six brands. Throughout the list, the washing machine capacity of 6Kg and above has increased its focus and occupied seven seats. Washing machine market trend of large-capacity washing appeared.

The "Report" pointed out that the washing capacity most concerned by consumers was 6Kg, and the proportion of attention was over 30%, reaching 30.9%, followed by 7Kg, and the proportion of attention was 16.9%. With the improvement of living conditions and the acceleration of the pace of life, consumers have higher requirements on the capacity and efficiency of washing machines, which has accelerated the continuous increase in the capacity of washing machines, and has also contributed to the continuous increase in the sales volume and market share of large-capacity washing machines.

In the 6Kg capacity washing machine model, Haier crystal drum washing machine is particularly favored by consumers. It adopts the industry's advanced "S-Dplus core frequency conversion" technology, can achieve a bass effect of 45 dB, the industry can achieve the lowest noise value, and effectively solve the washing machine in the operation process to the user caused by noise troubles. Not only that, with the smart delivery function, crystal drum can automatically perceive the weight of water and clothing, and intelligently add laundry detergent according to this, it can remove more than 20 times of â€œEuropean standardâ€ and reach 106 kinds of stains.

The "Report" also shows that in the first half of 2013, the pattern of brand awareness in the Chinese washing machine market remained stable, and Haier still maintained the market's attention in the fierce competition of other brands. Among them, Haier topped the list with a ratio of 36.9%, more than twice the number twice, and once again reelected China's ultra-popular washing machine brand.

Some experts predict that with the implementation of new energy efficiency standards for five categories of home appliance products such as inverter air conditioners and washing machines on October 1, the industry's access threshold will increase in the second half of the year, which will help the industry's leading players increase their share. At the same time, with the successive launch of affordable housing across the country, the two major positive factors have contributed to the optimistic outlook for the washing machine market in the second half of the year.

The Transformer Terminal Blocks have been widely used in the world's electrical and electronic engineering industry: large transformers, etc. The structure design of the transformer terminal takes into account the characteristics of convenient connection and firm screw connection, which can be installed on the guide rail quickly and conveniently. The product design conforms to IEC 60947-7-1 and other international standards.